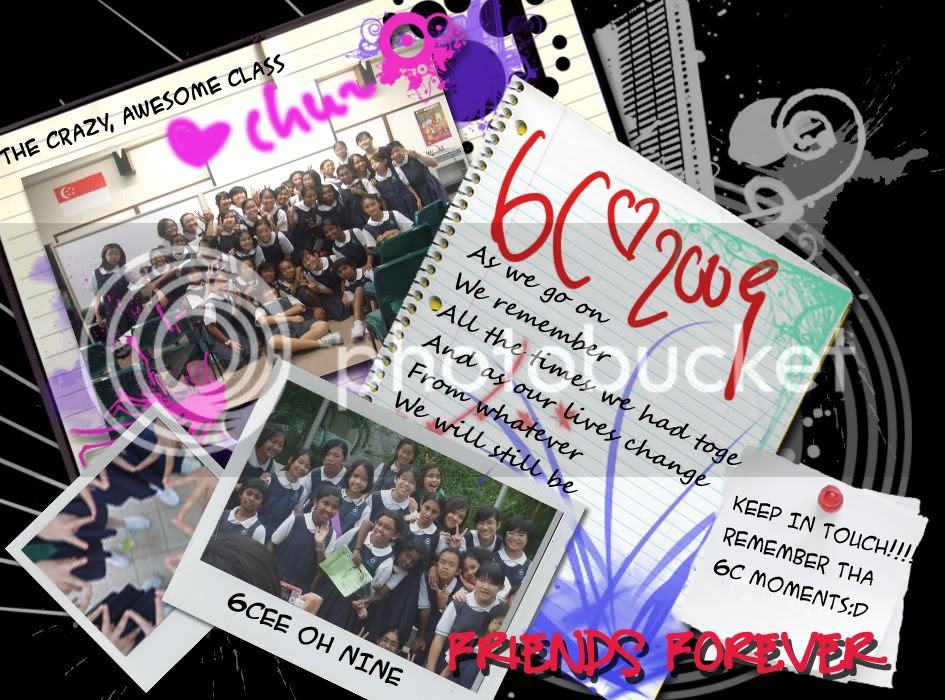 .Saturday, November 14, 2009 ' 10:35 PM Y
6C Forever
Today was graduation. It was so sad! Many of us cried. I know this blog is kinda dead already ( haven't even end of year yet) but i'll just try posting.
In the morning, the formal graduation was kinda boring. Many parents came, took picture blah blah blah. Next, after Mr Lee said that could go break, change, lunch whatever, we all started getting excited! haha. ok. the 'break' was 3 hours. Some people that live in chua chu kang also have time to go home! LOL. okay. So after the break, we met in class (3C) everyone was very excited to see people in weird/nice clothings so the first level was super noisy. Later, class by class, we walked to the hall and was invited by teacher shaking some stuff in cans. We had this great MC, quite fun lah him. First, we played games. 6C was joined with 6F and 6B and probably some other classes too so our group was the BIGGEST and had the LOUDEST scream. (obviously -.-) Aftewr that, we played games like the human formation thing must form like belt, caterpillar and a conveyor belt. It was hard working in such a big group of like more than 2 classes which is about 80 people. After that, we did spider web~! Whic groups that form the largest (they didn't really count that), fastest, strongest (they will throw the ball on the 'spider web' made from strings to test the hardness of it :D) Okay, and for that we didn't win either. But at last our group got 60 points so we won (i think) (we won a correction tape). After the spider web, we went for another eating break in the HALL! Finally the teachers allow us to eat outside of the canteen! HAHA! each of us had a free ben and jerry's ice cream and we could help ourslef to the buffet atg the back of the hall! (there was chocolate fondue and sushi!) Next, we had the dancing competition. We requested for the songs 'single ladies' by Beyonce. haha. we anyhow dance one. at last Tatum from 6J won instead of the GEP-ers. And then a singer called 'Inch' ( dunno how to spell) which graduated from our school in 2000 came and sing songs from her album and 'Forever and Always by Taylor Swift. Then we sang 'Graduation' by Vitamin C and the MC told us to hug our friends, treasure them that kinda thing and that was when many of us started crying. Then somemore the song was super long so we all cried for super long also. HAHA! That's kinda it. After that, we were all super sad. Then we took some pictures and went home. HAHA. After that everyone sms everyone say like only 5 days left all those farewell msgs. I think im done describing today's graduation.
-Clarette :D-

We finished our files (i hope) , everyt is going fine .

Yeahs , those who need to stayback , hope you got your forms signed ^^

Okays , that's all for me to rant about .

BTW If you hate the


Up Coming Birthdays for :